The After Life of a Container

Did You Know? A twenty-foot equivalent unit (TEU), a container, a box - no matter what you call it, it is the most efficient way to move cargo overseas. As Marc Levinson notes in his book The Box, it has “made the world smaller and the world economy bigger,” allowing cargo to flow freely and economies to become international players. The standard TEU is 20 feet long by eight feet high, made of heavy duty, weather and corrosion-resistant steel running vertically, with two doors on its side. When empty, it can weigh 2.24 metric tons and loaded up to 26 metric tons. 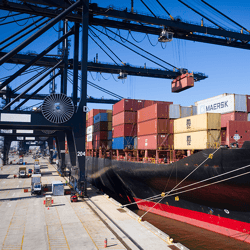 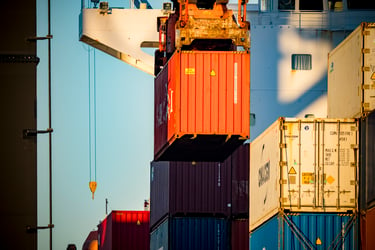 Caption: Containers being unloaded from vessel to the Bayport and Barbours Cut Container Terminals.

What Can You Do With a Container?

We have grown accustomed to seeing these TEUs on the road, behind a truck as they are whisked away to their next destination, but they can actually be transformed and utilized in many different ways. This begs the question, What can you do with a container?

In Houston, you may see them around the city, integrated in the design of businesses, thus giving the container a second life. Local bars like Truck Yard in East Downtown area or 8th Wonder Brewery use them. Closer to the East End, a historic community near Houston’s port you can find them at various places, ranging from use as murals, to screen movies, or retail.

On average, a container’s lifespan for transportation of goods can range from 10 to 12 years before it is taken out of service. However, a container can very well last up to 50 years depending on its use and ongoing maintenance to avoid rust, a typical culprit in its deterioration.

Places to visit in Houston 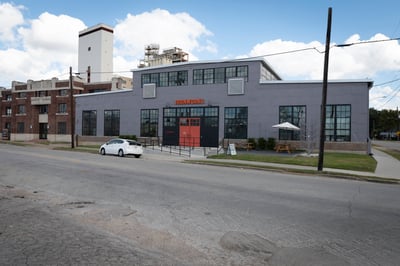 “After researching the various uses of containers, I found that many were repurposed into homes so I decided to develop a different concept of designing them as creative workspaces. When I started developing my vision for IRONWORKS, I knew this would fit with the industrial look I wanted to capture in the space,” noted Andrew Kaldis, owner of Ironworks and Kaldis Development. 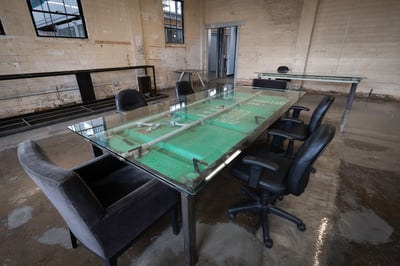 “I was able to establish a relationship with the right fabricator to alter the containers per my design. My hope for the building is that it continues to be a landmark for the area. It is very rewarding to contribute to a neighborhood and see it flourish,” noted Kaldis. 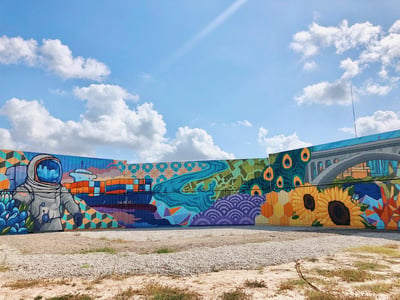 Caption: David Maldonado, a local Houston artist devotes his time to create murals and other pieces of art that represent the city. Mural agency Muros hired Maldonado to complete the East End River Mural on Clinton Drive using containers as the canvas. 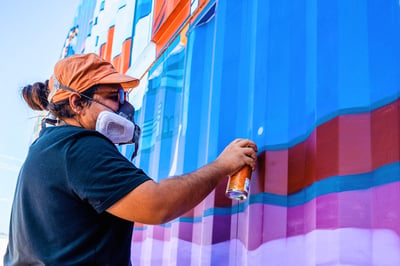 “Art has a way of building bridges in the community and public art is a great way of doing that. This [East River Mural] is the first time I’ve worked with shipping containers, and I would use them for future projects. I think it’s great when things are repurposed and used in other ways.” 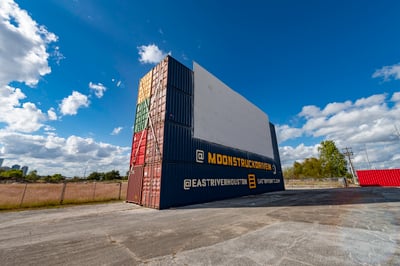 Caption: Moonstruck Drive In is a new addition to the East End, the drive in utilizes stacked containers to screen movies outdoors. Families can watch old-time movies up to the most recent releases from the comfort of their cars. 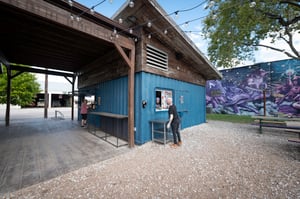 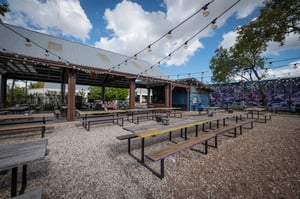 Caption: Moon Tower Inn is an American restaurant specializing in game-meat and hotdogs along with a variety of beer for an outdoor pub feel. The bar area is housed in a container.