All About Hispanic Heritage Month at Port Houston 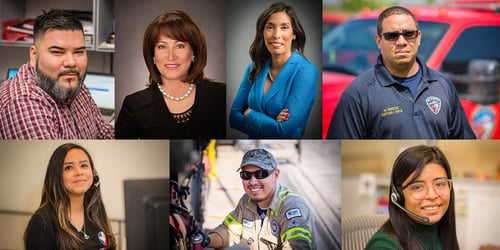 Each year, Americans observe National Hispanic Heritage Month from September 15th to October 15th, by celebrating the histories, cultures and contributions of American citizens whose ancestors came from Spain, Mexico, the Caribbean and Central and South America. The day of September 15th is significant because it is the anniversary of independence for Latin American countries Costa Rica, El Salvador, Guatemala, Honduras and Nicaragua. In addition, Mexico and Chile celebrate their independence days on September 16th and September 18th, respectively.

Hispanic Heritage Month is important at Port Houston because it honors the achievements and contributions of Hispanic American champions, who have inspired others to achieve success. We recognize that Hispanic/Latinx people make up a significant portion of our region’s population, enriching the culture of the greater Houston area with traditions, diverse origins and unique perspectives. We celebrate the innumerable contributions of Hispanic/Latinx leaders, authors, artists, politicians, doctors, activists, mothers, fathers and more, this month and beyond.

Although the national recognition of “Hispanic Heritage Month” does not specifically include related terms like “Latino” or “Mexican,” understanding the multifaceted nature of these identities is important. These terms refer to ethnicity, origin, and identity, based on shared culture rather than skin color or other physical features.

If you are ever unsure what term to use, it’s best to ask the person what their preference is. This can help you avoid an awkward moment and give you a chance to learn about another person’s heritage!

How to Honor Hispanic Heritage Month

…With your time: There are TONS of events happening around Houston in honor of HHM, from festivals and interactive art to concerts and pop-up markets. Check out this list to find one in your neck of the woods:
2022 Houston Guide to Hispanic Heritage Month Events | 365 Houston (365thingsinhouston.com)

…With your food: There is no question that Hispanic/Latinx culture has a major influence on our region’s cuisine. Check out this list to find a new favorite eatery close to work or home:
Our Guide to Latin American Eats in Houston (visithoustontexas.com)

"In the end, the American dream is not a sprint, or even a marathon, but a relay. Our families don’t always cross the finish line in the span of one generation. But each generation passes on to the next the fruits of their labor.”
– Julian Castro, Former United States Secretary of Housing and Urban Development