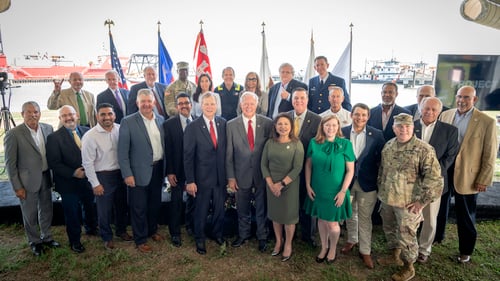 Caption: Bipartisanship and collaboration were on full display at the Project 11 Dredge Kick-Off Celebration event on June 1st, with the Port Commission, and Congressional, State, and Local delegations, leading the way.

Partnership, progress, and potential were on full display at the Port’s Project 11 Dredge Kick-Off Celebration on June 1st. Over 200 stakeholders and elected officials gathered to commemorate the kick-off for the $1 Billion project hosted by Port Houston and the U.S. Army Corps of Engineers at the USACE Galveston District Headquarters.

A joint effort across various federal, state, and local agencies helped bring Project 11 to life. The project received a major boost from the U.S. Army Corps of Engineers in January 2022 when $142 million was allocated to the project to help complete Segment 3, the Barbours Cut Container Terminal section. At 82% funded, Project 11 has received wide-spread support from a diverse group of elected officials and it’s on track to be completed by the end of 2025.

Ric Campo, the Chairman of the Port Commission delivered remarks to the crowd highlighting the partnership it takes to bring a project of such magnitude to this point. Chairman Campo also pointed to the potential and progress the project represents, citing that over 75% of the jobs sustained and created by the Houston Ship Channel are located in disadvantaged communities. Once completed, Project 11 will generate an additional $134 million annually in economic impact, equating to $367,123 a day in added benefits for the American worker and their families. 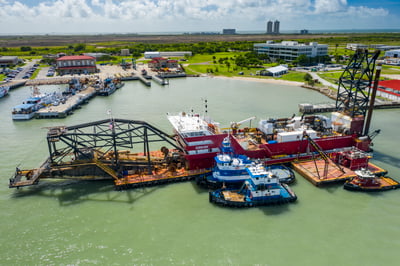 The newly retrofitted clean Dredge Carolina, owned by Great Lakes Dredge and Dock Company, arrived to Galveston for the event. Dredge Carolina is equipped with Selective Catalytic Reduction technology to significantly reduce NOx emissions, resulting in 38% cleaner than Tier 3 equipment. Lasse Petterson, CEO of Great Lakes Dock and Dredge Company, states “Dredge Carolina is one of the largest dredges in the United States. She is 340 feet long, 65 feet wide, and has about 16,000 horsepower.”

USACE Southwestern District Commander Col. Kenneth N. Reed stressed how important Project 11 is for the Galveston District and the District’s higher headquarters. “As the federal agency that maintains and constructs much of the nation’s public infrastructure, the Army Corps of Engineers continues to work with Port Houston on one of the most impactful infrastructure projects nationwide.”

The work of widening and deepening the Houston Ship Channel will have tremendous positive economic, safety, and environmental benefit for the entire nation. To learn more, visit www.expandthehoustonshipchannel.com.