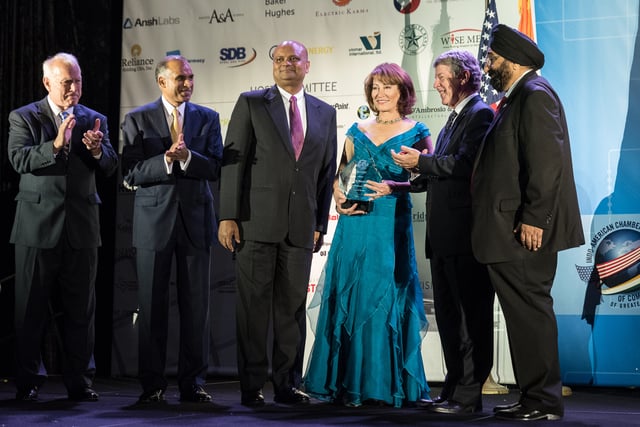 Port Houston received the Economic Impact Award from the Indo-American Chamber of Commerce of Greater Houston at the chamber's annual gala Sept. 30.

Port Chairman Janiece Longoria accepted the honor on behalf of the organization. As one of the world's busiest ports, the business activity in the greater Port of Houston generates more than one million jobs throughout Texas and $265 billion in statewide economic impact.

“The port long has been a significant economic driver for our region and our state and we are working hard to make sure that continues,” Chairman Longoria said.

Port Houston provides a strategic gateway for cargo and has been instrumental in the city of Houston’s development as a center of international trade. It is home to a sprawling petrochemical complex, which is the largest in the nation and the second largest in the world.

The Indo-American Chamber of Commerce of Greater Houston was established in 1999 to address an increasing need to educate local businesses and the Indo-American community at large about doing business with India.

The chamber focuses on local jobs by encouraging exports to India, and on bilateral trading opportunities.