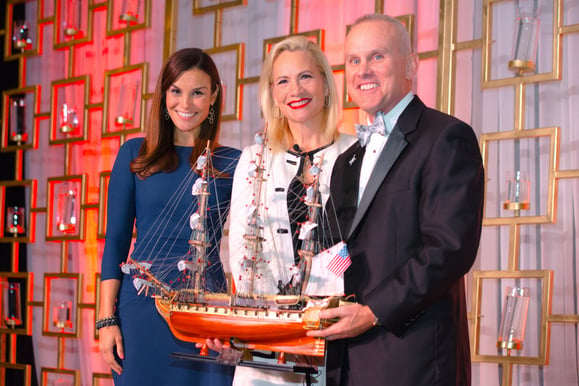 Shell received the award for its exceptional record of support for the Houston maritime community for nearly a century and its drive towards improving shipping in the Port of Houston. Lori Ryerkerk, executive vice president of Shell Global Manufacturing, accepted the award on Shell’s behalf.

“It is really my honor tonight to accept this award on behalf of the 3,500 maritime and shipping employees around the world and more than 6,000 Houston-based employees of Shell we have here,” said Ryerkerk. “This award comes to us because of the exceptional partnerships we have with various communities and organizations in and around the city and the Port of Houston.”

“Increasing efficient movements is the final part of how we collectively will sustain the Houston port region as the premier petrochemical port manufacturing complex in the U.S,” she said.

Through port efficiency projects, Shell has been a leader in data-informed shipping. Shell has also supported education by helping develop San Jacinto College’s Center for Petrochemical, Energy and Technology as well as introducing Shell Leadership Weekend for students at Texas A&M Galveston and sponsoring the community “Bike Around the Bay” event.

The Greater Houston Port Bureau’s Annual Maritime Dinner is the largest business formal maritime event in the U.S., attended by more than 700 industry professionals. It recognizes individuals and companies that have exhibited outstanding leadership and support in the port region.