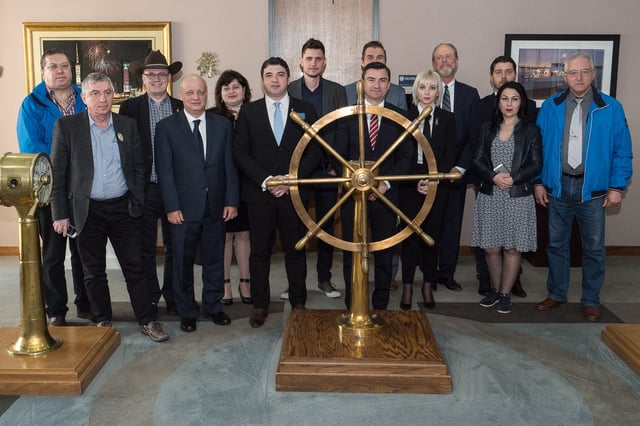 Port Houston hosted a Romanian delegation at the port’s executive building March 14. The country has been making advances in manufacturing and technology and the delegation requested a briefing from several Houston agencies during their Texas visit.

Chief Legal Officer Erik Eriksson discussed the port’s public terminal and operations, as well as cargo commodities. Foreign Trade Zone and Economic Development Manager Shane Williams discussed the port’s FTZ program, and how it is a benefit for U.S. commerce and markets.

“There is a $7 billion value in cargo that flows through foreign trade zones,” Williams said.

Every state in the U.S. has a foreign trade zone and Texas has seen more user growth in recent years, Williams noted. He explained the cargo process for foreign trade zones and also discussed Houston’s rising distribution activity and container trade share.

Port Houston’s Bayport Container Terminal that was opened in 2007 is being built out in phases, while the port’s Barbours Cut Terminal remains an essential facility for container shipping.

Houston is the fourth largest metropolitan area in the U.S and is the largest container port on the Gulf Coast.