Since 1914, Port Houston and the Houston Ship Channel have undergone major renovations one after another. Although the widening of the Houston Ship Channel (Project 11) is our current major project, it’s not the only project going on. At Bayport and Barbours Cut Container Terminals the main roads are undergoing construction to improve freight transportation.

The Port was awarded $9.675 million in grant funding through the Texas Department of Transportation (TxDOT) Texas Mobility Fund. This specific fund from TxDOT provides a method of financing for the construction, reconstruction, acquisition and expansion of Texas state highways and roads. The funds help pay for a portion of the larger project which will cost close to $18.9 million in total. 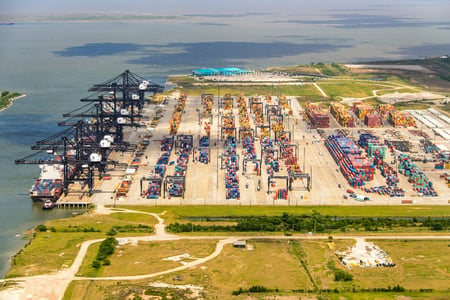 The first phase of the Bayport Container Terminal opened in 2007 and is now about 50% complete. When fully developed, it will have a total of 7 container berths with the capacity to handle 2.3 million twenty-foot equivalent units (TEUs). The terminal will include 376 acres of container yard and a 123-acre intermodal facility. Adding an inbound and outbound lane to Port Road will make a tremendous difference in freight efficiency.

Port Houston handles roughly 70 percent of the containers that move through the Gulf of Mexico and is the 6th largest container port in the nation. Barbours Cut was our original container terminal which opened in 1977 and has seen some big improvements over the years as well.

Barbours Cut Terminal’s most recent project involves intersection improvements at Barbours Cut Blvd and SH-146. This is the main intersection in front of the terminal which sees a lot of transportation traffic each day. With this enhancement there will be 2 additional northbound right-turn lanes from Barbours Cut Blvd onto SH-146. Additionally, traffic signals will be improved to facilitate freight fluidity and air quality. 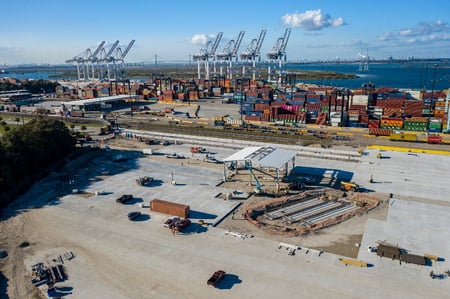 This is a minor project completely funded and reconstructed by the TxDOT approximately costing $500,000 dollars. It started in July 2020 and is projected to be finished later this month or early next month.

The amount of cargo coming through Port Houston’s container terminals has continued to increase steadily over the years, and there are no signs of slowing down.