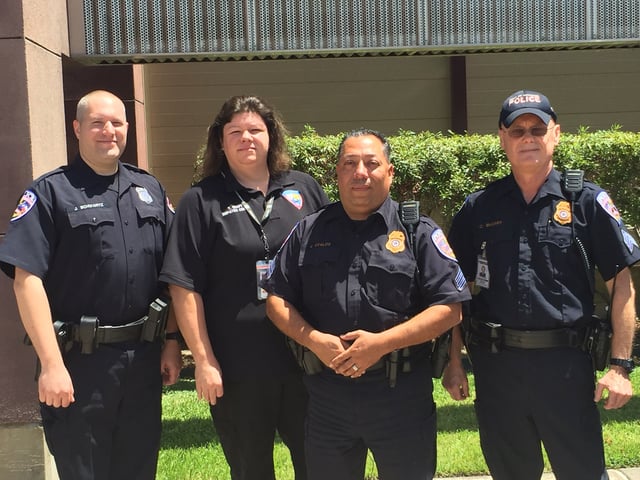 On Saturday, August 5, a potential suicide was averted, thanks to some quick-thinking Port Houston Police officers who spotted a man threatening to jump off the 610 bridge.

Port Houston Officer Jon Schwartz was en route to Manchester Terminal when he observed a motorcycle stopped on the southbound side of the 610 Bridge at the safety fence line. He noticed that the motorcyclist was acting suspiciously and notified Dispatch. After Officer Schwartz turned around and returned to the southbound side, he saw that the motorcyclist had climbed over the rail and was sitting on a sign bracket frame attached to the outer ledge, preparing to jump off the bridge. Houston Police Department Officer Helton, who had just arrived, and Schwartz began talking to the man, attempting to calm him down. They were joined by Sgts. Jimmy Avalos and Charles McCary.

Soon after, HPD units arrived and assisted in trying to talk the man off the outer ledge. When he did not appear to calm down, Schwartz, Avalos and Helton, along with other HPD officers, grabbed him and pulled him back over onto the bridge to safety.  The Crisis Intervention Response Team unit took the man into custody, and he was taken to Ben Taub Hospital for evaluation.

“Our Police Department officers did outstanding work in saving this man’s life by pulling him from the 610 bridge,” said Police Chief Mark Smith. “I would like to thank Dispatcher Tammie Craft, Officer Schwartz, Sgt. Avalos and Sgt. McCary for their quick and professional response.”