The Houston Ship Channel Expansion - Project 11 has been authorized to begin construction with WRDA passing in December 2020 and a "new start" designation in January 2021. As the advocate and local sponsor of this crucial federal waterway, Port Houston is partnering with the U.S. Army Corps of Engineers as well as private industry on a plan to expand the channel at an accelerated pace. With the help of those partners, Port Houston will begin the work this year, making the channel safer and more efficient and ensuring this waterway will continue to remain the national economic treasure it is today. 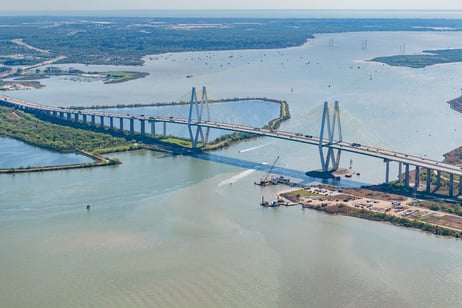 The Houston Ship Channel complex and more than 200 private facilities along the channel, collectively known as the Port of Houston, is now the number one port in the United States in terms of total waterborne tonnage. It is also ranked first for foreign waterborne tonnage and number of vessel transits with nearly 285 million tons of cargo moved through the port overall in 2019.

This waterway expansion is critical in helping widen and deepen the channel for safer and more efficient navigation of vessels calling Port Houston’s eight public terminals and the more than 200 private facilities operating along the channel. Specifically, the project will widen the channel by 170 feet along its Galveston Bay reach, from 530 feet to 700 feet. It will also deepen segments up to 46.5 feet, make other safety and efficiency improvements, and craft new environmental features.

The design aspect of the project, which is the eleventh major widening and deepening of the waterway in its history, already is virtually completed. Among the next steps will be to start construction in Galveston Bay this year.

“To go from Congressional authorization to securing a pathway for construction in less than a month is phenomenal news,” Port Houston Chairman Ric Campo said. “Project 11 will provide the greater Houston metropolitan area continued job growth and economic development opportunities, while improving air quality by reducing traffic congestion on the channel.”

The goal is for an initial 3% reduction of NOx from vessel emissions. A wider, deeper therefore safer channel has fewer transits, shorter wait times and decreased turnaround distance. During the next 11 years, it is anticipated air emissions will be reduced 7% annually.

“We’re grateful for our bipartisan Congressional delegation and the many channel stakeholders who aggressively advocated to get this project authorized and funded,” Guenther said. “Without their continued support, we wouldn’t be in this position today.”

The channel is one of the most vital waterways in the country, connecting the Gulf Coast to other ports around the globe. The waterway has more deep-draft ship visits than any other port in the country, and nearly 200,000 barge transits every year as well. As energy and manufacturing exports increase and vessel sizes grow, improving the channel continues to be nationally important.