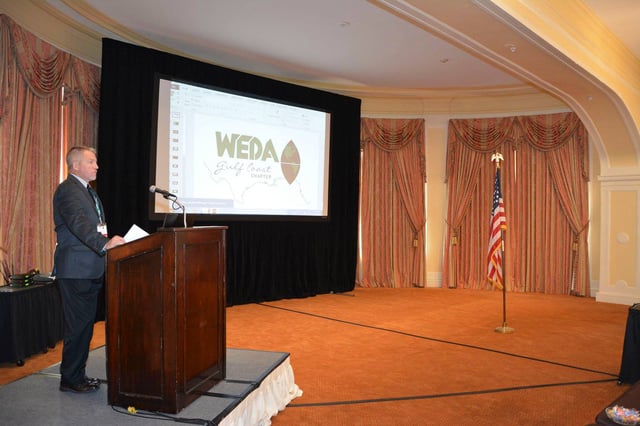 The Gulf Coast Chapter of the Western Dredging Association (WEDA) conducted its annual meeting Nov. 16 at the Hotel Galvez in Galveston, marking the first time the event has been held outside of New Orleans. The chapter represents the Gulf States of Texas, Alabama, Florida (West Coast), Georgia (Western), Louisiana and Mississippi. Over 180 industry professionals attended, including Port Houston’s channel development department.

The meeting provided a forum for the exchange of information of interest to the dredging industry and its associates, partners and stakeholders. Representatives from all areas of the industry, including regulatory, resource agencies, contracting and manufacturing attended to discuss dredging economics, benefits, technologies and current issues.

“This conference brought the big picture of the entire Gulf region and gave our port an opportunity to work with the U.S. Army Corps of Engineers on more placement options for non-federal dredged material,” said Mark Vincent, director of channel development for Port Houston. The information presented provided the audience a full scope of Corps’ federal responsibilities along the Gulf Coast and an overview of the agency’s dredging program, noted Vincent.

This year’s event was merged with the U.S. Army Corps of Engineers’ Galveston District’s annual dredging meeting. The American Association of Port Authorities contributed updates on the Water Resources Development Act (WRDA) and legislative matters related to ports and harbors.

“We are thrilled to bring the annual WEDA meeting to Texas as there are numerous maintenance and new work dredging projects around the Houston-Galveston area. This was one of WEDA’s largest events with a diverse mix of international attendees,” said Maxie McGuire, 2016 President WEDA Gulf Coast Chapter.