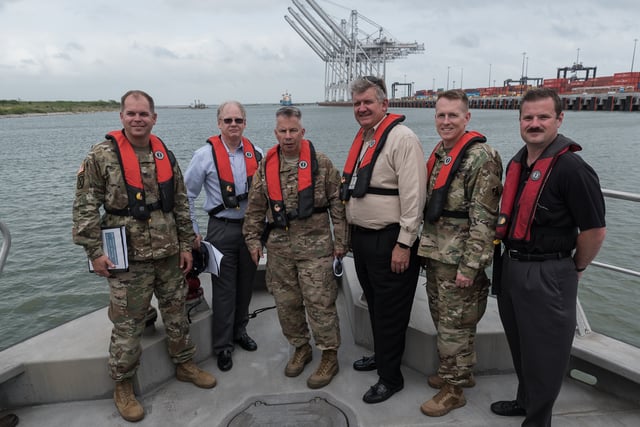 Port Houston hosted Lt. General Todd Semonite for a briefing and tour May 17. Semonite serves as the commanding general and chief of engineers for the U.S. Army Corps of Engineers.  The Corps is a critical partner to the port because of its mission to maintain the Houston Ship Channel.

The briefing was followed by a tour of the Shell Deer Park manufacturing site, a refinery and chemical plant on the ship channel that handles more than 2,500 vessels each year.  The tour continued aboard a Port Houston fireboat to view other facilities along the channel, concluding at the Barbours Cut Container Terminal.

“The Corps is looking right now how to support the exports and imports to the nation of this particular port,” said Semonite.

Guenther noted that oil, gas, petrochemicals, breakbulk steel, and containers are the top economic drivers of the port.

The Port of Houston Authority serves as local partner with the Corps in maintaining and growing the Houston Ship Channel. This vital waterways serves the manufacturers and employers at the Port of Houston who are responsible for sustaining more than two million jobs and $617 billion in economic activity for the nation.

The port is currently working with the Corps of Engineers on a $10 million dollar feasibility study for future improvements to the waterway.