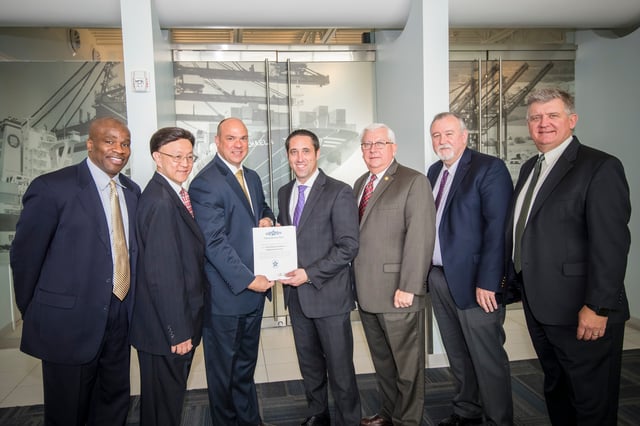 The Texas Comptroller of Public Accounts is the chief steward of the state’s finances, serving as the chief tax collector, accountant, revenue estimator and treasurer for all of state government.

Port Commissioners John Kennedy and Stephen DonCarlos along with Executive Director Roger Guenther welcomed the Comptroller to Bayport, providing an overview of the recent capital investment and growth at the Port of Houston.

In addition to highlighting the increased economic activity and job growth, port officials discussed the importance of infrastructure and the need for the efficient movement of freight into and out of the port region.

The Economic Alliance Houston Port Region and Houston Pilots also provided Hegar with a perspective on the region’s growth in manufacturing, as well as navigation and safety on the Houston Ship Channel.

As part of the visit, Hegar announced the results of his office’s economic impact study of the Port of Houston.  The study determined that operations around the Port of Houston support an estimated 509,000 jobs and add $73 billion to the gross state product.

The study stated that the Port of Houston’s size and diverse capabilities have helped Texas become the nation’s largest exporter — and the world’s 10th largest economy. A document regarding the port’s impact to the state economy can be found here.