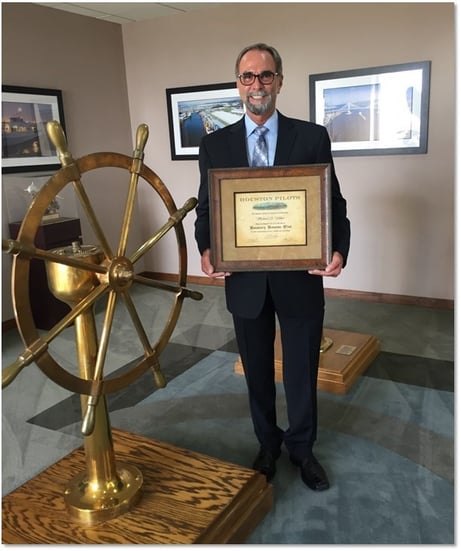 It takes unique skills and endurance to be a Houston Pilot, safely navigating some of the world’s largest ships in and out of the Houston Ship Channel, one of the most challenging waterways in the world.

Longtime Port Houston employee, Mike Usher, who retired in December 2016 after 32 years of service, recently received an honor by the Houston Pilots designated as an honorary Houston Pilot. Only three people have received the award in the last 25 years.

“Over the course of his distinguished maritime career, Captain Usher earned a well-deserved reputation as a safety-conscious and professional mariner, and a tough, but fair, marine investigator,” said Capt. Robert Shearon, presiding officer of the Houston Pilots.

“The Houston Pilots appreciates and recognizes the lasting contributions that Captain Usher has made in furthering navigation safety on the busiest ship channel in the United States,” he added.

Usher was presented with the framed certificate naming him an Honorary Houston Pilot for longstanding service, loyalty and friendship at a June industry luncheon with Capt. Shearon and others, and was taken aback by the gesture.

“I was taken totally by surprise,” said Usher, who began his career in 1984 as a Hoseman on the Farnsworth in the marine department and worked his way up to senior captain on the fireboats, compliance coordinator and manager of pilot administration. “It’s overwhelming to be recognized, and I’m humbled and deeply honored.”

Usher’s maritime journey began at an early age, when he entered the U.S. Navy and spent seven years on amphibious ships and destroyers on both the east and west coasts.

When Usher left the Navy and joined Port Houston in the Marine Dept., he had a desire to become a Houston Branch Pilot. He became qualified and eligible, but, as he described, “didn’t quite muster.” However, he continued to work closely with the piloted system.

Usher has such respect for the Houston Pilots after his experience with its members and becoming familiar with their pilotage system, he went on to attain his master’s license, then his harbor pilot license.

“I felt blessed to be involved with this pilot group, and I was always determined to serve the Pilot Board and to protect everyone’s best interests,” he said. “Coming back full circle 10 years ago as a committee aide to the Pilot Board Application Review Committee and Investigation and Recommendation Committee, I’ve realized my dream.”