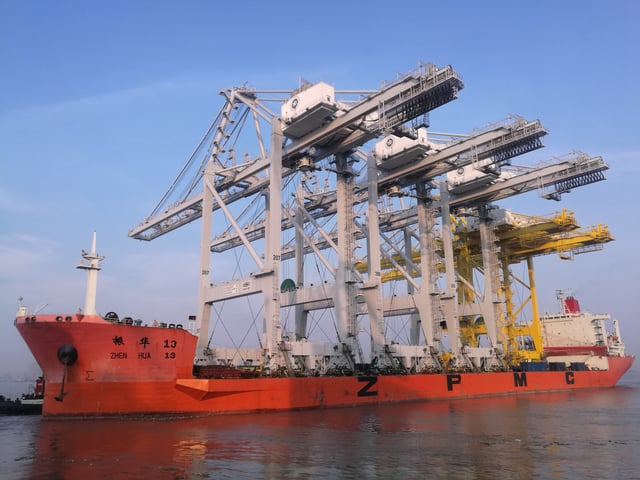 Three new Super Post-Panamax cranes are on the way to Port Houston’s Barbours Cut Container Terminal from Shanghai, China. They were secured on the M/V ZHEN HUA 13 July 23. Once these 405-foot-tall cranes reach their destination after a journey of more than two months, they are slated to replace three older ones at Barbours Cut.

The cranes, incidentally, will travel with booms fully raised.

The cranes are included in the $700 million modernization program under way at Barbours Cut to increase cargo-handling efficiency and capacity. In addition to the new cranes, other infrastructure improvements are expected to increase terminal capacity from 1.2 million to 2 million TEUs. A total of 14 ship-to-shore wharf cranes and 44 rubber-tired gantry cranes (RTGs) are currently operating at the terminal.

Port Houston Executive Director Roger Guenther remarked that “considerable improvements are being made by Port Houston as we strategically prepare for expected growth.” It is anticipated that the U.S. Gulf region will see steady growth in coming years due to increased production and export of plastic resins, which should follow several plant expansions along the Houston Ship Channel coming on line.

The cranes were approved by the Port Commission in 2015, and they are expected to be delivered to Barbours Cut on or about Oct. 7. The journey to deliver the cranes to Port Houston can be followed at this link: https://www.marinetraffic.com/en/ais/home/centerx:-12.0/centery:25.0/zoom:4.