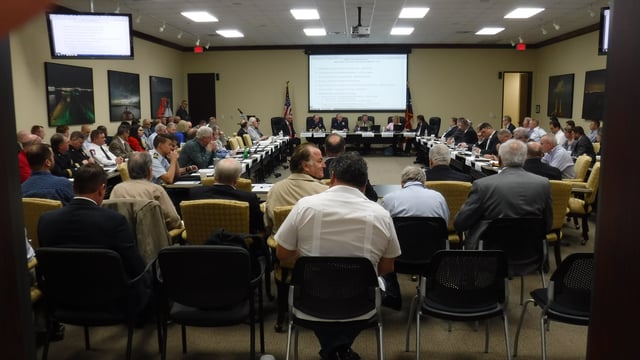 The Lone Star Harbor Safety Committee held its first meeting of the year Feb. 10, which marks the organization’s five-year anniversary. The group held its annual election for several terms on the board and had a visit from Rear Admiral David Callahan of the 8th U.S. Coast Guard District.

U.S. Coast Guard VTS Director for Sector Houston-Galveston, Steve Nerheim, provided his annual state of the waterways presentation, while Lone Star committee chairs provided and overview and quarterly updates of their subcommittee and working group efforts, which range from navigation operations and dredging to maritime education.

“I can’t thank you all enough for what you do for this committee and for our port community,” James Prazak of Tricon Energy, Ltd., chairman of the Lone Star Harbor Safety Committee, told the members.

“There are many exciting things that we are working on this year as an organization. We have some challenges ahead, but we have a great team of volunteers and agency partners who will be tackling those head-on,” added Prazak.