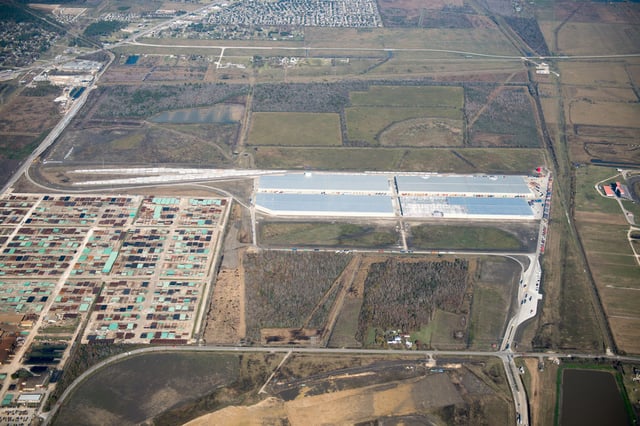 Katoen Natie, one of the largest global suppliers of logistics and distribution services based in Belgium, recently opened a new two million square foot logistics facility with 530 hopper car spots at their Chambers County Logistics Terminal in Baytown, Texas on December 9th.

The first phase will ultimately be an 11 million square foot facility with 3,000 hopper cars spots developed on 560 acre complex, the company said.  The new warehouse space will be used to handle the new resin exports coming on line in the Houston area. The ribbon cutting and opening was made official by Her Royal Highness Princess Astrid of Belgium during her Texas tour in early December.

After successfully accessing large deposits of cheap natural gas, there has been more than $50 billion invested in petrochemical plant expansions in the region to produce polyethylene resins or plastics, a product used worldwide in the production of everything from toys to garments and many products used in everyday life.

“Resin exports are poised to expand significantly in the Houston area and Katoen Natie’s investment in Baytown is another indicator that Port Houston is the most cost effective and most efficient gateway to ship new resin production to overseas markets,” said John Moseley, senior director of trade development for Port Houston.

Katoen Natie is involved in the packaging and distribution aspect of the commodity. “We are looking to add petrochemicals and specialty chemicals to our production. This will help us accommodate consumer and business sectors and demand,” said Frank Vingerhoets, President of Katoen Natie. Other upcoming expansion projects include sites in Baton Rouge, Louisiana, and Hutchins, Texas, a town near Dallas, noted Vingerhoets. The service out of the Dallas area is bi-weekly.

Katoen Natie will serve on a panel at Port Houston’s Synthetic Resins Symposium event in January 2017.