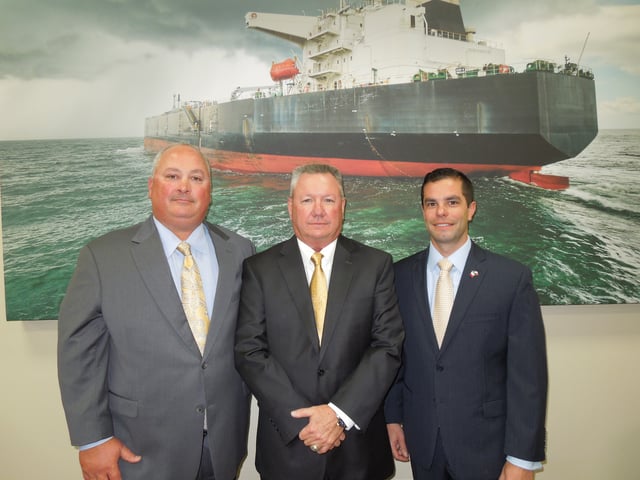 The Houston Pilots, responsible for navigating some of the world’s largest ships on the Houston Ship Channel and into the Port of Houston, held their annual election Dec. 7. Captain Robert Shearon was re-elected to lead the organization as Presiding Officer in 2017. Members of the Executive Committee include Captain Sean Arbogast and Captain Matthew Glass.

The role of the executive leadership includes day-to-day administrative and management tasks of the organization. “It’s not as much water time on the ships, but it is a big responsibility overseeing over 94 experienced captains and deputies who work extremely hard to ensure that those vessels make it to their dock destination safely and efficiently,” said Shearon.

The mission of the Houston Pilots is to safely guide ships and vessels in and out on the Houston Ship Channel. The Pilots are active in the community and nationally through various industry organizations including the Greater Houston Port Bureau, West Gulf Maritime Association, Economic Alliance Houston Port Region and many other port-related groups.

“The Houston Pilots Association is an elite group of mariners with an extensive background in maritime shipping,” said Mike Usher, the outgoing pilot administrator for Port Houston. The process to become a pilot consists of the Board of Pilot Commissioners for Harris County Ports, the “Pilot Board,” which submits to the governor applicants that the Pilot Board finds to be qualified for appointment, noted Usher.