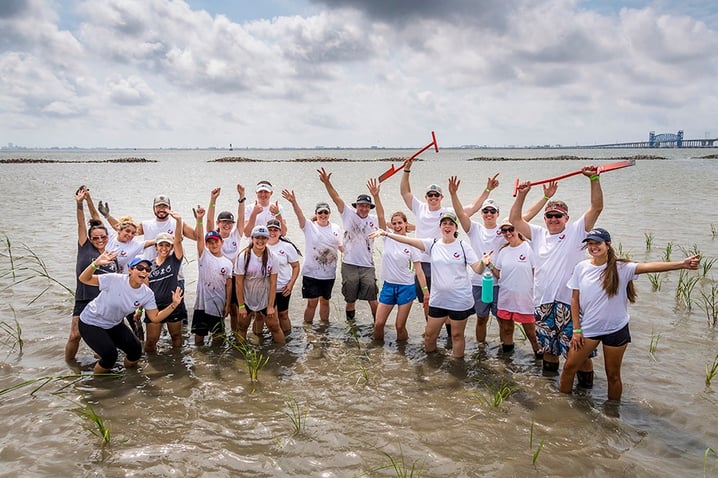 Port Houston volunteers had their hands full (of cordgrass) this spring, as they partnered with the Galveston Bay Foundation on several environmental stewardship projects focused on beautifying and restoring the bay.

Port Houston’s Community Relations and Events department was invited to take part in the foundation’s Education Day by the Bay May 10, as part of its environmental education programs. Held at the foundation’s newly purchased property in Kemah, the program hosted more than 100 students from Westbrook Intermediate School.

This unique, educational event was developed to engage students through hands-on activities, teaching them how to further protect, restore and maintain the health of Galveston Bay.

Port Houston team members from across the organization were back at it again just a few days later for the 20th anniversary of Marsh Mania, held March 12 at Virginia Point near Galveston.

“Thanks to all our volunteers and their families for coming out to support this important cause,” said Garret Berg, assistant community relations manager at Port Houston. “Coastal wetlands play an essential role in the overall health of Galveston Bay, and we appreciate all the individuals and organizations that participated.”

In its 20 years, Marsh Mania has involved more than 8,000 community volunteers in the restoration of roughly 209 acres of vital estuarine marsh habitat at 92 sites around Galveston Bay.

Port Houston’s next environmental outreach event with the Galveston Bay Foundation will be the Oyster Reef Restoration Project, scheduled for Saturday, July 21 in Galveston.