You’ve probably heard Houston talked about as “the energy capital of the world,” and it truly is. But you probably didn’t know that there are many Houston companies, like Port Houston, that are deeply focused on improving the environment and providing continued sustainability for the future. Port Houston is constantly finding new ways of doing things and implementing changes now that will carry the organization into the future. One of our strategic priorities is to be an environmental leader by implementing ambitious programs and goals to drive this forward.

For nearly 25 years, Port Houston has been the nation’s top port for energy and petrochemical cargo. Starting in 2002, we were the first port authority in the U.S. to achieve an ISO 14001 certification for our environmental management system. Nearly two decades ago, we were already a leader, putting sustainability framework into place, demonstrating that our team was looking not only at our obligations as a port operator, but at what our opportunities were to go beyond the requirements. 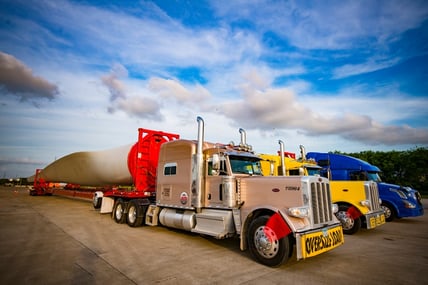 Not only is Port Houston going all-in on renewable electricity, but it also plays a vital role in wind energy. Texas ranks number one in the nation for wind projects and much of the wind energy components are imported through Port Houston. In fact, this year alone more than 19,000 short tons of wind power equipment have arrived through our docks.

Sustainability for the Future

In between the two milestones Port Houston hit in 2002 and 2020, we have also made several other moves toward sustainability. In fact, the port has reduced its carbon footprint by 55% since 2016 and is on target to reach 70% by 2040. Our environmental leadership strategy has short-term goals like tracking port-generated emissions and long-term aspirational goals like zero-emission ship docking and a 90% reduction of greenhouse gas pollution. Moreover, we are updating the Clean Air Strategy Plan that will formally identify specific actions to reduce emissions from maritime and associated transportation sources at our facilities.

In terms of equipment, Port Houston has continued to stay ahead of the curve by employing new environmental innovations. We’ve committed to purchasing diesel-electric hybrid RTG cranes emitting over 80% less emissions as compared to diesel-only counterparts. In addition, there are a total of nearly 30 electric ship-to-shore cranes across the various Port Houston terminals to reduce our emissions. 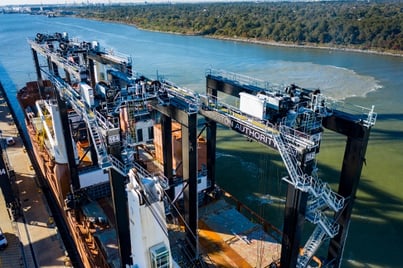 But the innovations don’t stop there. Soon Port Houston will be the first port in Texas to use an electric terminal tractor to move containers around Bayport and Barbours Cut terminals. We also recently purchased five new electric vehicles aimed at potentially overhauling our light-duty fleet over the next 10 or so years. Furthermore, we’ve purchased the first “waste shark” drone to help clean up to 350 pounds of litter daily in the Houston Ship Channel and gather data on the water quality.

For the continued concentration on environmental strategies, Port Houston was even a finalist in three categories at the 2020 G&P Global Platts Global Energy Awards. This is a true accomplishment and reflects the progress of Port Houston in its environmental leadership . Everyone at Port Houston is committed to acting now and moving the organization toward a future with increased sustainability and renewable electricity.