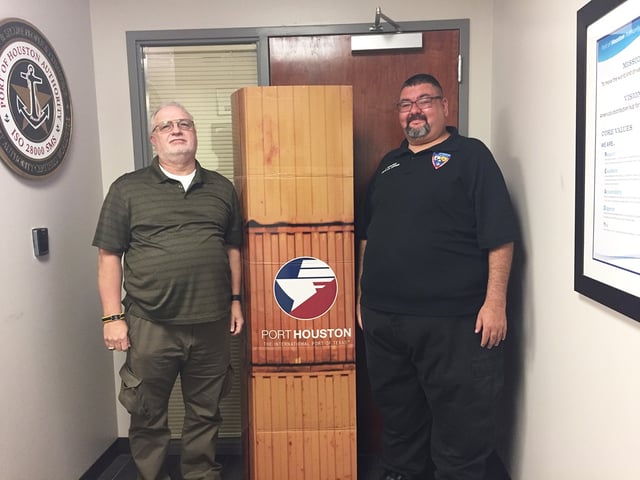 Two Port Houston dispatchers served many others during the catastrophic rain events from Hurricane Harvey in late August.

Staying at command during the flood, Juan Sanchez and Tom Sauls continued to take emergency calls for assistance, including many instances and cases of high water.

After arriving for their shift on Friday, August 25, Sanchez and Sauls wound up staying  on duty for the  duration of the storm due to impassable roads and port closure.

During this time, Sanchez had received word that his apartment had flooded. He lost everything in his apartment, yet he continued to work diligently to keep the port and first responders safe.

“Due to the circumstances they were limited in food and sleep and yet they continued to perform in a flawless manner,” said Robert Unverzagt, Emergency Management Telecommunications Supervisor.

“Their performance during Hurricane Harvey brings great credit upon themselves and the Port Houston family.  Their service and sacrifice truly brought light to the role they play in being a first responder,” added Unverzagt.

A total of 928 emergency calls for assistance were handled by Port Houston dispatchers in 2016.

12 port police officers attributed to the response during the storm as well. A group stayed behind as others could not get to work.

Hurricane Harvey brought with it catastrophic flooding in a four-day period as many areas in Houston received more than 40 inches of rain resulting in hundreds of thousands of homes being flooded out, displacing more than 30,000 people in the Houston region and prompted more than 17,000 rescues around Harris County.