Port Chairman Recognized at 2018 State of the Port 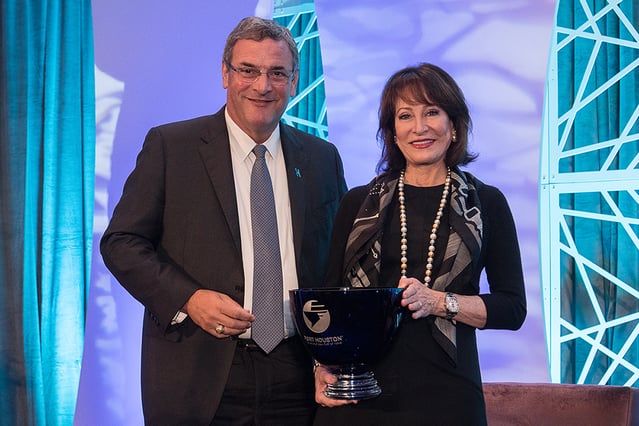 On Nov. 29, the Greater Houston Partnership's "State of the Port" event honored Port Chairman Janiece Longoria, who is completing her third and final term. More than 500 industry professionals and public officials attended.

Port Houston Executive Director Roger Guenther provided the address, sharing that the past several years have been the most significant growth period in the port's history. This year will set records, he noted.

“As we sprint toward the finish of 2018, we are proud of another record-breaking performance across all sectors of our business,” said Guenther. “Our Turning Basin terminals have seen a solid year of handling steel and general cargo, and container activity through Barbours Cut and Bayport facilities has been simply phenomenal.”

Chairman Longoria also provided remarks and participated in a fireside chat discussion with Guenther that was moderated by Marc Watts of the Friedkin Group.

A total of $287 million of new port projects are planned for 2019, all with funds being generated by operating revenues at Port Houston public facilities.

The port continues to make investments to its terminals to stay ahead of the demand curve in container volume and is reinvesting in its breakbulk facilities, noted Guenther.

Guenther also thanked Chairman Longoria for her continued leadership. “Janiece has worked in the best interest of the institution and for the economic prosperity of the region.”

“She has successfully built upon the foundation of our port predecessors, generating jobs, generating growth and has strengthened our rightful place as the leading port in the nation,” added Guenther.