Port Chairman Honored for 16 Years of Service on Port Commission 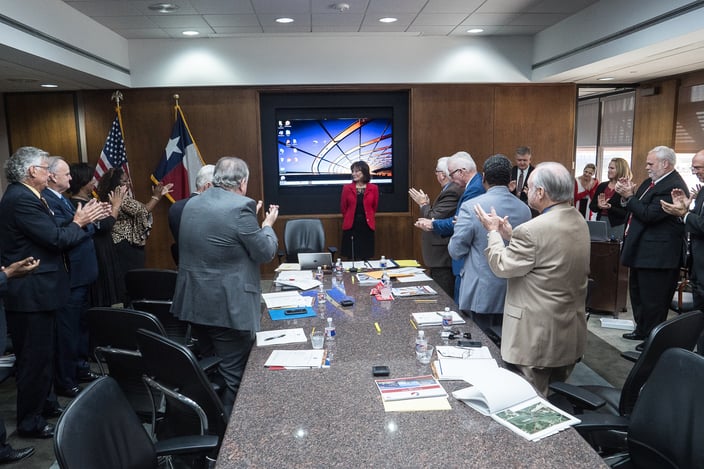 She has served in the position of Chairman since she was unanimously appointed by the governing bodies of the City of Houston and Harris County Commissioners Court in a joint session held January 2013. Her six-year term ends in January of 2019.

Actions taken by the Port Commission Wednesday were consistent with Chairman Longoria’s priority to seek continuous support for improvement and maintenance of the Houston Ship Channel. The commission unanimously authorized the Executive Director to negotiate with the U.S. Army Corps of Engineers for an agreed recommendation to identify and pursue one or more alternatives for the federal feasibility study for improvements to the Houston Ship Channel.

Executive Director Roger Guenther was one of many to praise Chairman Longoria’s leadership. She received several resolutions and expressions of gratitude from elected officials including a video tribute with comments from Houston Mayor Sylvester Turner, Harris County Judge Ed Emmett, state Senator-Elect Carol Alvarado, and U.S. Rep. Sheila Jackson Lee, among others.

“It has been my great honor to serve as Port Commission Chairman for the past six years,” said Chairman Longoria in response to the accolades and ovations received throughout the meeting.