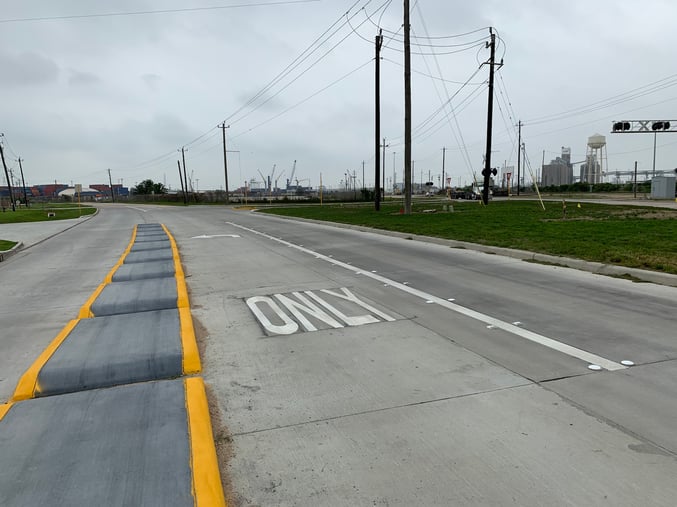 The $12.7 million Peninsula Road construction project near Port Houston's Jacintoport and CARE Terminals has been completed. The two-way road was widened to accommodate three lanes inbound and one lane outbound and will greatly improve traffic flow and safety. The project was completed by Harris Co. Precinct 2 in partnership with the Texas Department of Transportation and Port Houston. The improvement, which took nearly 18 months to complete, is expected to bring $123 million in benefits to the Houston region over 10 years.

The area was one of the most congested roads in the port region and resulted in a number of accidents. In addition to improving the congestion and safety of this area, the project benefits include decreasing supply chain costs. Rail crossing safety has also been improved, with train signals added at six locations and crossing arms at five of those locations. The rail crossings are operated by Port Terminal Railroad Association and Union Pacific.

Port Houston contributed $800,000 to the project. The Port also facilitated Harris County’s participation in the Texas Legislature’s Rider 48 Grant Program and the project was awarded up to $10.2 million.

“Port Houston is proud to have worked on sourcing project funding on behalf of our industrial and governmental stakeholders on this project and appreciates their involvement in making this happen,” said Bruce Mann, freight mobility director for Port Houston. “It has been great to be part of this project from the beginning, and to now see the de-bottlenecking that has occurred and the significant improvements to safety for both the railroad and roadway users.”

"This project will make a big difference in our county’s infrastructure,” said Adrian Garcia, commissioner for Harris County Precinct 2. “This road has been overdue for an upgrade to handle heavy truck use for many years, and I am very pleased that it’s now complete. I want to thank our partners at Port Houston and TXDOT for their hard work in upgrading this roadway.”