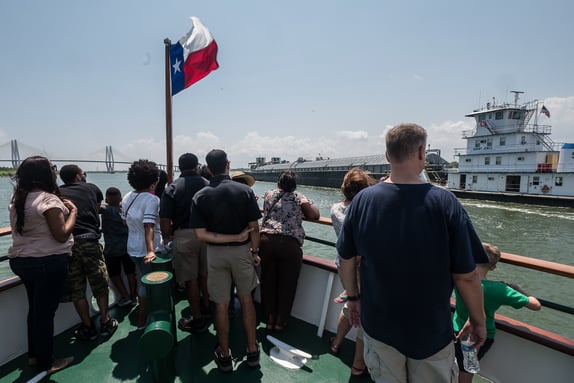 First known as the “Beautiful ship to serve the Port of Houston” and a “show window to the port,” the M/V Sam Houston tour vessel was christened on July 30, 1958 and took its inaugural voyage through the Houston Ship Channel.

The Sam Houston Boat Tour has become a staple to the Houston community. It is the primary link between the port and the public. The vessel was named after the legendary military commander who led the fight for Texas independence from Mexico and later statehood.

“The Sam Houston Boat Tour is now extremely popular and we are proud to continue the tradition of offering this tour experience to local residents and visitors from around the world,” said Leslie Herbst, Port Houston director of community relations and events.

For 60 years, the port’s public tour has showcased the Port of Houston to nearly two million visitors. The M/V Sam Houston offers visitors a unique opportunity to get an up close look at one of the busiest ports in the country. Each year, nearly 30,000 visitors tour the Houston Ship Channel.

On average, Port Houston’s M/V Sam Houston operates 10 tours a week with the ability to carry 100 passengers per sailing. Passengers on the Sam Houston Boat Tour have included royalty, political leaders, astronauts, celebrities and visitors from all parts of the world.