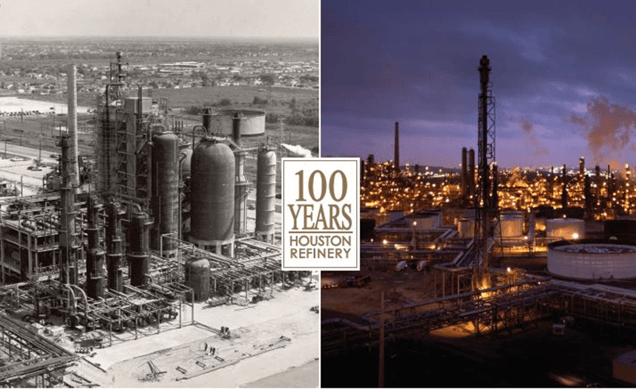 The Houston Refinery of LyondellBasell, one of the world’s largest plastics, chemicals and refining companies, celebrated its 100th anniversary March 22.

The refinery was one of the first petroleum refineries constructed on the Houston Ship Channel. It traces its origin to the Sinclair Refining Company's 1918 purchase of 710 acres of land, which includes the point where General Sam Houston and the Texas Army crossed Buffalo Bayou as they marched to victory at the Battle of San Jacinto.

The refinery, situated along the city limits of Houston and Pasadena, is one of the largest in the U.S., with a capacity of 268,000 bpd of heavy crude oil. It transforms very heavy high-sulfur crude oil into clean fuels, including reformulated gasoline and ultra-low-sulfur diesel. Other products include heating oil, jet fuel, petrochemical feedstocks, aromatics, lubricants and petroleum coke.

"I want to thank our refinery team for their dedication and commitment. I'm so proud of the important work they do every day," said Bob Patel, chief executive officer of LyondellBasell. "The products made at our refinery go far and wide and allow goods to move, people to travel and economies to grow."

The refinery generates approximately $671 million in annual economic activity for the local community and is home to 1,600 workers. In 2017, the site contributed more than $200,000 and 4,000 volunteer hours to support local initiatives, driving improvements in health, safety, education and the environment.