More online shopping trends mean more goods moving across Port Houston’s docks, and the need for additional space to store that cargo. Thus, we are seeing distribution centers in the Port Houston region being built to keep up with demand.

“With a trillion-dollar year on the visible horizon, coupled with the size and continued growth of the Houston area, I wholeheartedly believe Houston’s industrial market is primed for a windfall of e-commerce leasing activity in the coming months and years,” said Justin Tunnell of Lee & Associates.

The City of Houston is still in its infancy for e-commerce, as it has historically been served by regional distribution centers in Dallas, noted Justin Robinson of Stream Realty Partners. “However, that model has rapidly changed due to accelerated delivery expectations of consumers,” Robinson said. “As a result, e-commerce companies have established facilities in Houston to more efficiently and effectively meet consumer needs.”

Much of the cargo activity has occurred around Port Houston. Stream has been involved with Principal Real Estate’s Bay Area Business Park, which has grown a 3.3 million square foot Class AA industrial development and minutes away from the Bayport and Barbours Cut Container Terminals. 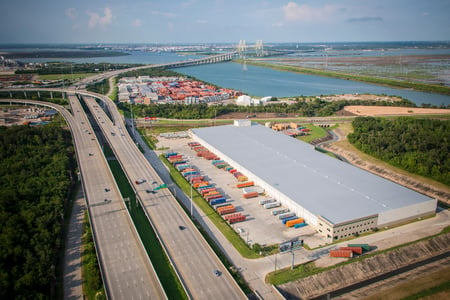 Growth for the City and Port Houston

“Port Houston continues to be among the fastest-growing container ports in the country, fueled by an increasing number of import distribution centers in the Houston region and a robust manufacturing base in the state of Texas,” NAI wrote.

That growth is projected to continue, CBRE said in a newly released report.

“Houston is a growing port of entry to supply the Southcentral U.S, which is projected to increase in population by 7.1 percent over the next five years,” stated the report, entitled “The Changing Flow of International Trade.”

The growth of imports has factored into the decision-making by Port Houston leadership to continue to expand infrastructure. Three new Neopanamax electric cranes for the Bayport Container Terminal, which is still being built out, are under construction now. The $35 million ship-to-shore cranes, which are for Wharf 5 at the Bayport Container Terminal, are expected to be operational in the summer of 2021 and will be capable of handling 18,000-TEU ships. The cranes will bring Port Houston’s fleet of ship-to-shore cranes to 29.

Retailers in Texas and beyond are banking on that kind of growth and investing in Houston. The port and city drive home Houston’s fast-emerging image as a major gateway for imports.