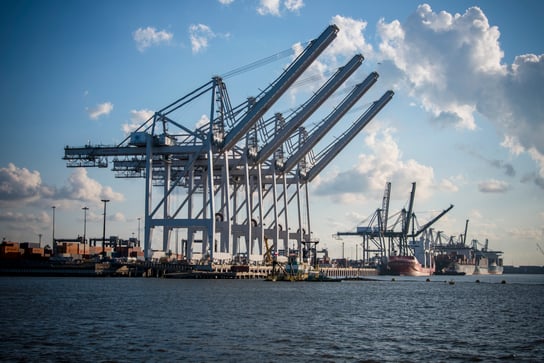 Caption: Neopanamax cranes at Bayport. Three additional cranes are expected to be operational in 2021.

A contract for three new Neopanamax electric cranes for the Bayport Container Terminal was approved Sept. 24 by the Port Commission of the Port of Houston Authority. The $35 million dockside cranes are for Bayport’s Wharf No. 5.

The three new ship-to-shore cranes are expected to be operational in the summer of 2021 and
will be the tallest to date for Port Houston, standing at 158 feet (48 meters) under the spreader
and will be capable of handling 18,000 TEU-sized container ships. The three cranes will bring Port
Houston’s fleet of ship-to-shore cranes to 29.

“Operationally, our facilities have handled close to 30 million tons of cargo through August, an
increase of 7 percent over last year as both container volumes and steel have maintained their
upward trends in 2019,” Executive Director Roger Guenther said during the Port Commission’s
September meeting.

The number of twenty-foot equivalent units or container TEUs handled through August totaled nearly two million, an increase of 11 percent compared to this time last year. Guenther said that he expects to approach three million by the end of the year. Financially, operating revenues stand at $260 million year-to-date, combined with favorable cash flow.