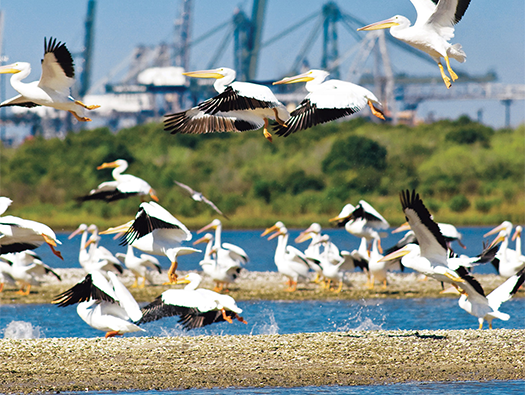 Evia Island, a six-acre bird island located along the Houston Ship Channel and the mouth of East Bay, is an extremely important waterbird nesting site in Galveston Bay. With nearly 10,000 nests comprised of 10 bird species, it’s the breeding site with the most nesting pairs in the Galveston Bay system. These bird species include white pelicans, brown pelicans, great blue herons, egrets and roseate spoonbills among others.

Port Houston played a key role in creating this bird island during the last major Houston Ship Channel deepening project in 2005, where the channel was deepened to 45 ft. and 530 ft. wide through Galveston Bay. The island was made from dredged material through a collaborative effort with the Beneficial Use Group led by Port Houston and the U.S. Army Corps of Engineers, and also included Houston Audubon Society.

Helping create and improve environmental features along the Houston Ship Channel is a priority for the team at Port Houston. “Evia Island replaces habitat being lost on the coast. There are plans to create more of these bird islands, throughout Galveston Bay, as a result of the proposed the Houston Ship Channel Expansion - Project 11,” said Kyle Clark, manager of channel improvement at Port Houston. Project 11, currently in the planning phase, will widen the channel by 170 feet along its Galveston Bay reach, from 530 feet to 700 feet. It will also deepen upstream segments, make other safety and efficiency improvements, and craft several new environmental features.

Richard Gibbons, conservation director at the Houston Audubon Society said, “The use of dredge material to recover wetlands and colonial waterbird nesting habitat is an incredible achievement. Fortunately, we were successful in creating one of the most productive nesting islands on the Gulf Coast with Evia Island. The Houston Audubon Society is grateful for the opportunity to work with Port Houston in managing the many thousands of birds that depend on Evia for nesting and year-round roosting.”

The Audubon Society, through a contract with Port Houston, manages Evia Island for colonial waterbird nesting to maintain the island as a productive refuge. Some activities of their habitat oversight include vegetation management to attract specific species of birds and efforts to control fire ants on the island that may impact nests and young bird hatchlings.

For the past five years, Port Houston and the Houston Audubon Society have focused on developing enhanced monitoring techniques to accurately capture the number of nesting pairs utilizing Evia Island. The Audubon Society has incorporated the use of aerial drones and wildlife cameras in their monitoring efforts. The Port has been supporting the Audubon Society with its annual winter bird counts with volunteer staff and boating equipment through its vendors. The unique size and location of Evia Island allows the Audubon Society to test new technologies before use at some of the other extensive sites in Galveston Bay.

Learn more about the environmental benefits of Project 11 at www.expandthehoustonshipchannel.com/benefits/.