Port Houston is continuing to focus on improving infrastructure at its terminals. As the largest port in the Gulf and the sixth largest container port in the U.S., Port Houston knows the importance of keeping ahead of demand to meet the changing needs of vessels, businesses, and the overall supply chain.

July was a busy month for Port Houston’s Bayport Container Terminal. The U.S. Army Corps of Engineers renewed our Bayport permit and the Port Commission approved a nearly $37 million contract to purchase three new dockside electric container cranes for Wharf No. 6 at Bayport, which is currently under construction. Additionally, we received a shipment of five new hybrid rubber-tired gantry cranes and another four are expected to arrive in late August.

With these vital additions, we can continue the master plan of expanding the Bayport container terminal as well as other facilities and properties outside Bayport for the next five years to meet consumer and carriers’ needs. Construction has already begun with building out Wharf No. 6, Container Yard 2, and other properties at Bayport.

This improvement is part of the larger strategic plan to optimize infrastructure and Houston Ship Channel capacity to better serve the region. By 2040, Port Houston plans to add more berths to the Bayport container terminal, bringing the total to as many as nine berths and a capacity to handle more than 4 million TEUs. By that time, there will be 21 dockside electric container cranes and 84 rubber-tired gantry cranes working at the Bayport facility. 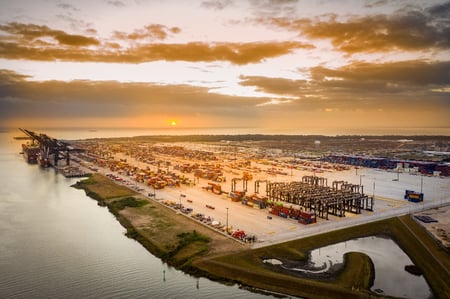 In addition to building infrastructure, Port Houston is focused on efficiency, understanding the value of moving goods quickly through our gates and to consumers. Plans include increased transloading ability, warehousing capabilities, and the addition of an intermodal rail yard adjacent to the Bayport container terminal complex. Plus, continued use of innovative technology will improve terminal efficiency and maximize Port Houston’s supply chain visibility and world-class logistics support. In total, $1.4 billion in capital investments are planned over the next 5 years and potential $4 plus billion over 20 years to enhance Port Houston’s facilities and the waterway.