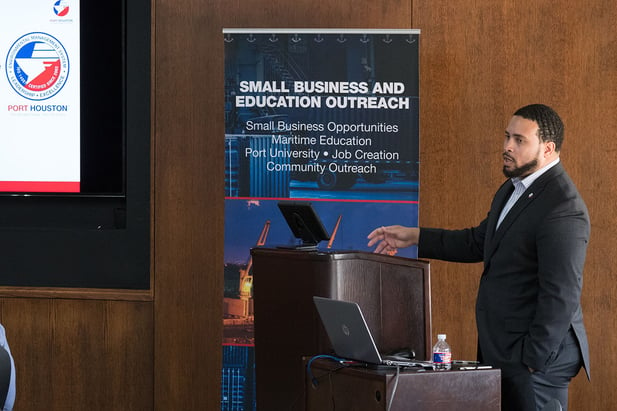 Port Houston strives to be an environmental leader in the community, and staff engaged with numerous small businesses during a Small Business Industry-Specific Workshop on Environmental Affairs held recently.

Attendees received an overview of the port’s environmental department, including programs, projects and prosperity. The presentation was made by Trae Camble, Port Houston’s director of environmental affairs.

Port Houston holds an ISO-14001 environmental management certification and manages waste disposal, air and water quality, environmental auditing and stewardship programs at all of its facilities.

The event was held in coordination with the port’s small business development program, which offers a series of workshops for entrepreneurs to learn how to do business with the port.

“We have a variety of environmental projects and services at Port Houston, and a lot of them require contractor support,” Camble said. Notable projects include storm water permitting and environmental testing.

As one of the nation’s busiest ports, the Port of Houston generates nearly $7 billion in business activity annually. More than $547 million has been awarded by Port Houston to registered small businesses since 2002.