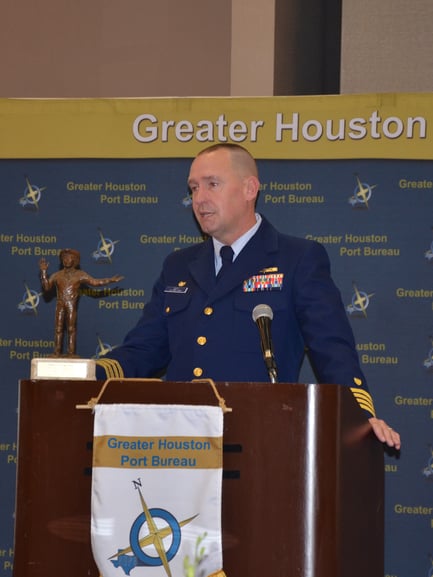 The U.S. Coast Guard supported the Gulf Coast region heavily during Hurricane Harvey. With additional support from across the country, the Coast Guard was able to station its rescue and recovery teams in Houston, Corpus Christi and Beaumont/Port Arthur prior to the major storm. Capt. Oditt commended the response from private citizens, industry, and local and federal agencies for their part in ensuring the safe reopening of the region’s ports.

Port Houston’s fireboats were some of the first vessels out to evaluate the waterway conditions, noted Oditt.

One of the challenges that the Coast Guard experienced this time unlike past storms was the unexpected use of social media for rescue operations from residents in flooded areas as well as its 911 emergency calls. The lessons learned in Texas were able to be used shortly thereafter for recoveries from Hurricanes Irma and Maria.

The U.S. Coast Guard Sector Houston-Galveston is a critical stakeholder and partner with Port Houston as well as the many private facilities along the Houston Ship Channel. It is the principal federal agency responsible for maritime safety, security and environmental stewardship in U.S. ports and waterways.